Notice: Trying to access array offset on value of type bool in /home/elifeh/drmattbook.com/wp-content/themes/sunspot/functions.php on line 15

Notice: Trying to access array offset on value of type bool in /home/elifeh/drmattbook.com/wp-content/themes/sunspot/inc/jetpack.php on line 20
 Life Doesn't Have to Hurt | DrMattBook.com

Trauma Recovery: Sessions With Dr. Matt is exactly what any person affected by PTSD (the victim and/or family member) needs. 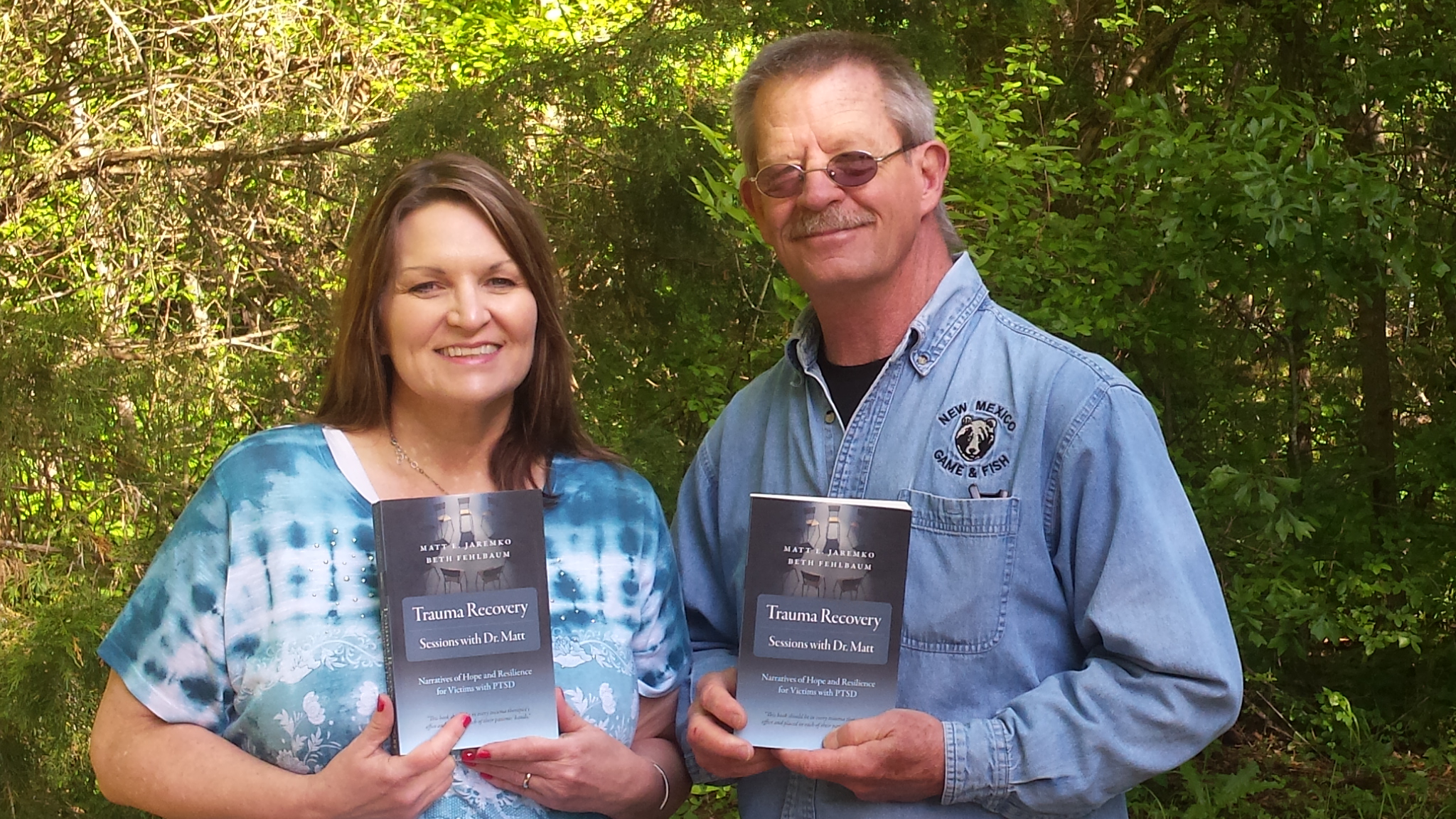 This book is a starting place for hurting people who are seeking healing, either on their own or in partnership with a therapist or other helping person. Dr. Matt E. Jaremko maximizes readers’ understanding of Post-Traumatic Stress Disorder (PTSD) by explaining its origins in easy-to-understand language and offering insight into the process of reclaiming a life from trauma. Beth Fehlbaum shares her insight from the perspective of a person who experienced trauma, was once scared to death about going into therapy, and is now recovered.

Most powerfully, Dr. Jaremko and Beth Fehlbaum created characters: a psychologist, Scott “Dr. Matt” Matthews, and his ongoing therapy group, to illustrate how recovery can and does happen. The situations these characters survive; their struggles and triumphs of reclaiming their lives, and their potential for thriving are all realistic. We reassure people who are terrified of trying therapy by providing them with a “fly on the wall” perspective of observing the recovery process.

For example, there is a scene in Chapter 2 in which Felicia, a 34-year-old survivor of sexual assault, is reluctant to enter Dr. Matt’s office for her first group therapy session. The reader gets to experience exactly what Felicia feels as she is sitting on the swing on the wrap-around porch of Dr. Matt’s 19th century Victorian home that has been converted into a therapy office. Further, the fictional Dr. Matt displays the actual verbal and non-verbal responses that a real-life therapist with 30 years of experience has had shaped to help reluctant clients face the terrifying tasks of treatment. Trauma Recovery: Sessions with Dr. Matt is full of moving and elucidating scenes like it, and all the while, the science behind these scenes is explained in easy-to-understand language and concepts.
The moving and sometimes gut-wrenching scenes depicted in this book will have the reader cheering for the struggling patients while at the same time coming to several “A-ha!” moments when their struggles are explained in psychologically sound concepts and processes.

Part One: Trauma’s Role in Robbing the Victim of Important Life Values By Matt E. Jaremko

In the early 1980’s, my Monday evenings were spent as co-leader of an open-ended therapy and support group for Vietnam veterans at the Memphis Vet Center, a storefront clinic and service center housed in downtown Memphis. The Vet Centers were the VA’s program to make services more intimate and available to veterans separate from the larger VA hospitals

Group sizes ranged from 3 to 20 participants, homeless vets alongside retired officers. Most attendees came to only a couple of sessions, but there was a sizable block who were “regulars” attending dozens of sessions in the 3 years I was involved leading the group.

Most group participants had psychological and behavioral problems associated with Post-traumatic Stress Disorder. But as I listened to them talk about themselves and to each other, the most valuable lessons I learned from these veterans had more to do with their strengths than their weaknesses. First, one of the biggest tragedies of their military experience was not necessarily the PTSD symptoms of heightened anxiety, moodiness, nightmares, flashbacks, shame and/or horror of having witnessed or committed horrible acts.  For many, the worst outcome of serving in that war was being robbed of the value system they believed prior to their service.

Most Vietnam veterans volunteered in order to contribute to a cause they thought noble and worth their sacrifice: to protect a democratic way of life by providing a check on Communism. Unfortunately, after serving, many vets concluded that their sacrifice had been wasted by politicized leadership agendas and military tactics that made little sense. The veterans were disillusioned because they began to see they were being used by their country, rather than serving their country.

Moreover, when those combatants returned home, their patriotism was attacked and shamed by the process of citizens involved a war-protest movement.  Home was a place in which the vets no longer fit. They were hurting, alone and bitter about what they had seen and done. The ideals upon which they had decided to serve had been shattered. In the resulting “values vacuum,” only the misery of powerful PTSD symptoms was left.   Additionally, they were rarely taught how to replace or renew the compromised values system.

A second thing I learned from those Vietnam Veterans was the importance of the “platoon”, usually a squad of 10 or 12 men. Even though together for only 13 months, the bond that quickly developed among the platoon was very powerful and motivating. It was not uncommon in the group sessions to hear men talk about how much they cared for the others in their basic small unit. In fact, often it was only other vets these men felt comfortable with and/or trusted.

I came to realize the healing power in those small groups. The Memphis Vet Center Monday Night Therapy and Support group became a “platoon” where vets could work with each other to rediscover or replace their lost values. Once they accomplished this values clarification, many found more strength to cope with the symptoms of PTSD because they became more receptive to learning the cognitive and behavioral skills helpful in rebuilding life after trauma.

Since those days at the Vet Center, I have been honored to be involved in the treatment of many other folks who had traumatic events in their lives, including Childhood Sexual Abuse, motor vehicle accidents, crime victimization, natural disasters and sexual assault.  A common feature of these trauma survivors is this loss of belief in previously-held values. Values can be defined as life activities or behavioral outcomes considered important, even vital, in a healthy life.  A partial list of values considered essential to healthy living would include but not be limited to perseverance, respect, honor, love, sacrifice, truth, freedom, compassion, bravery, kindness, wisdom, safety and trust. Clarity about what is important in life is often changed for trauma victims. Like the combat veterans’ loss of guiding patriotic values, survivors of Childhood Sexual Abuse (CSA) spend the first 8–10 years of life learning trust, only to find that it was no more authentic than a politician’s promise. Many battered spouses go through life in fear for their physical safety, only to have such fears confirmed by violence, thus eliminating a valuable sense of security. A vacuum is formed where once there was a strongly-held belief about an important feature of life. Without a sense of knowing what is important in life, trauma victims find less motivation to engage in the hard work of facing unpleasant symptoms. Avoiding the constant negative symptoms becomes their main focus of life.

Even a brief examination of the history of humans shows an incredible capacity to cope with the most dire of circumstances when focused on values meaningful to the culture or social group at large. In the absence of those values, coping with hardship is greatly reduced, maybe even non-existent. Individuals have sacrificed much, even their own lives, when pursuing the “higher good.”  But when not clear about that great good, victims tend to remain stuck in self-preoccupation. The values vacuum must be addressed to find increased motivation and strength in coping post-trauma. Since the main method by which we learn values in the first place is through social interaction with important people in our lives, group process is a powerful mechanism by which victims can examine changed values systems and begin to renew and replace them.

Rates of Trauma and Overcoming It

A recent study (Kilpatrick, et al, 2013) reveals that over 80% of 3000 people surveyed report having experienced a major trauma. 80%! These traumas include physical or sexual abuse-53%; death of a family member due to violence-51%; natural disaster-50%; accident/fire-48%; witnessing physical or sexual assault-33%; and combat or warzone exposure-8%.

Most victims of trauma (including most veterans of military combat) “get over it” in 12-18 months. But 20% don’t. They develop PTSD. What is the difference between the 80% who adjust and the 20 % who can’t “get over it”?

An entire article can and should be devoted to the complicated concept of “getting over it.” For starters, even if victims can get past the trauma, their life narrative is forever changed. Plus, somewhere between 40-60% of folks who have a life trauma end up eventually saying that their life is better for it: an outcome called post-traumatic growth (Calhoun and Tedeschi, 2103).

In fact, if one thinks about it carefully, a good question to consider is WHY IS THERE NOT MORE PTSD, if over 80% of people report having had trauma in life?  My experience with Vietnam veterans and other trauma survivors has led me to the conclusion that folks who “get over it” address the destruction of their values system in some kind of group interaction, formal or otherwise.

PTSD is a disorder of “being stuck” in a never-ending cycle of avoiding the unpleasant experiences, believing and/or trusting in nothing once-valued and a lack of belief that something can be done to change this cycle (self-efficacy).

In order to overcome the effects of trauma, a victim can’t just learn new skills to cope. The altered values system must be addressed. The sad fact of the matter is that traumatic experience drastically changes one’s life narrative. The purpose and meaning of the life traumatized are shaken to the core.

The narrative of a life can be going along great, maybe even according to one’s life plan, and then WHAM!—a trauma happens, and the narrative changes. Before trauma, a glimpse of the internal dialogue might be summarized as “Everything is okay/I’m in charge/I like my life/ I have hope/this is fun, if not hard.” After trauma, however, it becomes “The hurt is unbearable/I can see no end to it/I can’t do anything to stop this pain/others don’t understand/nothing matters anyway/my life is awful/I’m awful/HELP/leave me alone.”

That changed narrative must be re-written to include a new story line, one that rediscovers or replaces the lost value system. The second half of this two-part article examines the process of how one’s internal dialogue creates a life narrative and how that life narrative can be changed so that post-trauma reactions can become post-trauma growth.